Office Lens was launched on Windows Phone over a year ago and is now available as an app for Apple and Android devices. Office Lens is a handy capture app that turns your smartphone into a pocket scanner. It works with OneNote and OneDrive so you’ll never lose a scan. You can use it to take pictures of legal documents, pages from books, receipts, business cards, whiteboards or sticky notes—then let Office Lens crop, enhance and save to OneDrive in the format(s) you choose. Just like that—all the scanned images you capture from Office Lens are accessible on all your devices. (I assume Office Lens is similar to Evernote’s Scanner app only supported on Apple devices although it appears to do much more than Scanner)

Office Lens should be a great tool for anyone’s genealogy toolbox, especially when you are at a location where a copy machine is not available, you are not allowed to copy documents, can’t get a document to lay flat, or have to photograph it from an angle. Where Office Lens cannot recognize an area in a document as text, it will save that area in place as an image so the document is preserved in its original layout.

Below are some of the features Office Lens supports:

You can read more about Office Lens on the Microsoft Office Blog and make sure you watch the video there. YOU WILL BE AMAZED WHAT IT CAN TO! 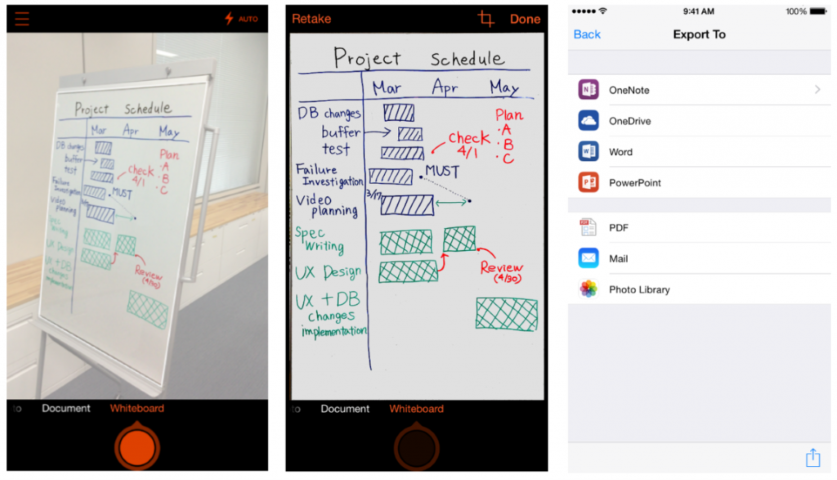 I just installed Office Lens on my Samsung Galaxy S5 Android phone and tried it on three different documents. The first was a printout of a group sheet from Ancestry.com where most of the text was inside boxes. The second was an ancestor’s report that had a row dots on each line in front of the names instead of spaces. The third was a simple print out from a Word file I had created from a FamilySearch.org birth record. After photographing each, I had Office Lens save them to my Photo Gallery and to OneDrive as an MS Word file. (I could have selected to save each in multiple formats.) The photo was saved to my phones gallery and the Word files were saved to my OneDrive account under Documents \ Office Lens. (I did have to log in to my OneDrive account.) I did not make an effort to photograph each document directly from above but took them from a slight angle.

Office Lens didn’t do so good with the Ancestry.com report. It identified much of the document as graphics rather than text but text outside of a box was recognized. On the second document on it did much better but the dots confused it and that portion of the page was identified as a graphic. Overall however, it recognized 95% of the text correctly. The results from third document were almost perfect with a small section in a corner of the page where no text was identified as an image. All of the text was readable and searchable. The small image artifact was deleted with no ill effect on the rest of the page. In each of the three, the text that was recognized and read was perfect. Given that this is a beta (on Android only) I was very pleased.

I also took a photo of a page in a book where the page was arced in the middle of the book and would not lay flat. Office Lens did an excellent job of making the page flat. It correctly read 99% of the text. Where there were check marks at the start of some of the lines, it saved them as images. However the font used in this book made recognizing some of the like millimeter and some programming code problematic. Where one line was in italics, like most OCR software, it had major problems. However, it would have taken a few minutes to clean up the problems and I would have had a usable document.

You can download Office Lens for Apple devices from the Apple App Store and in the Play Store for Android devices.